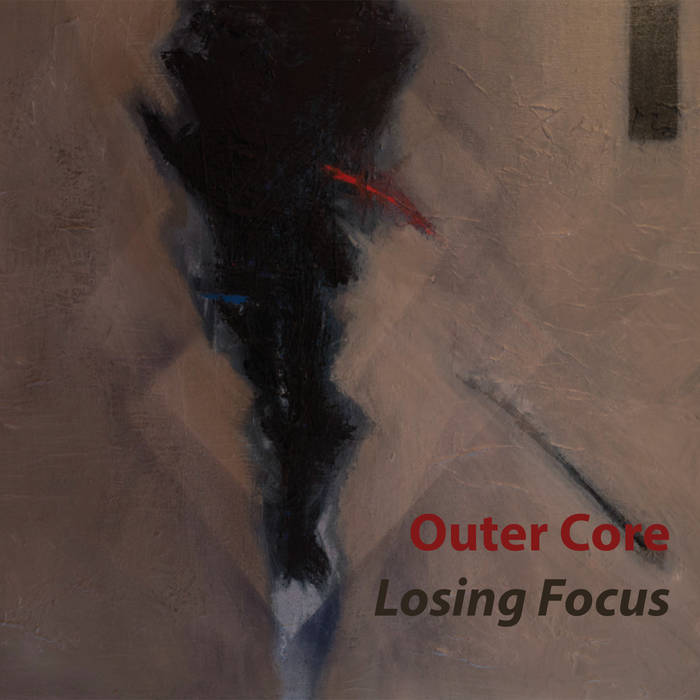 When I was first asked to write the liner notes for Outer Core's debut album, "Losing Focus", I was a bit surprised, having not seen
them play a gig. If I had to describe this album in one word it would be: explosive. "Losing Focus" is a collection of works that are
full of peaks, valleys, unexpected twists & turns, and exceptional group improvisation. Above all else, there is a sense of trust and
camaraderie between these four talented individuals that is undeniable.

This album starts out with a bang. We are immediately thrown into the fire and into the middle of a conversation between
trumpeter Cyrus Nabipoor, saxophonist David Bode, and drummer Joey van Leeuwen. Notably missing is bassist Amina Scott,
but we are introduced to her on the title track, "Losing Focus". Scott and van Leeuwen set the foundation for the horns to deliver
a haunting call and response melody. Nabipoor's clear and melodic approach to improvisation is showcased throughout the
record with his solo on this track being one of the best examples. Bode's solo is played over a new bass line that comes out of
nowhere. The melody is then re-stated over this new bass line. Outer Core's compositions successfully utilize deception, usually
by doing the exact opposite of what's expected.

This is especially evident during "Ducks In A Row", a 14-minute journey that begins with a drum intro from van Leeuwen. From
there, a frantic melody is stated over van Leeuwen's swinging ride pattern, anchored by Scott's driving bass lines, and
immediately dives into free group improvisation. While we were introduced to Amina Scott on "Losing Focus," we really get to
know her playing on "Ducks In A Row" where she freely interacts with Nabipoor & Bode, often times being the springboard for
each soloists’ ideas to flourish. The communication between the horn players must be noted as they often begin their own
thoughts by referencing exactly what the other soloist played before. van Leeuwen does a great job of keeping the intensity
high while not being overbearing, and his decision to lay out at times allows the group to explore other textures while giving the
listener time to catch their breath. Balance is key for most group improvisation to work, and Outer Core executes this at a high
level. "Ducks in A Row" really showcases what this group is all about.

On "Eating Out", we are treated to a totally free improv piece that features Scott playing arco throughout. This offers another nice
change in texture that keeps the record flowing. Next up is my favorite cut on the entire album: "Daphne". This beautiful ballad
takes full advantage of using lush horn parts to create a sense of longing and mystery. Bode and Nabipoor both have great solos
on this track and the interlude that follows is gorgeous. "Daphne" definitely reminds me of Wayne Shorter's ballads from the
1960's like "Lady Day" and "Contemplation".

"Expansion" is further evidence of how Outer Core uses deception to toy with the listener's expectations. This fast tune begins
with a wild melody, but suddenly becomes a slow dirge that finds its way back to the burnout swing we heard from the start of
the tune. Scott's solo at the end of the song is some of her best work on the record and reminded me a lot of the great Jimmy
Garrison. The final track, "Failing Together" is a nice way to end the album with its calm and serene setting. As a listener, I felt like I
was able to digest everything that had come before while listening to this song, and Bode's beautiful use of soprano sax is a nice
touch.

It's sort of ironic that this album is called "Losing Focus" because Outer Core never does. These are seven cuts that are well
thought out and executed. This record contains conversations not only between four musicians who have a mutual respect for
one another, but also between friends. These exchanges are free flowing with a range that can change from light-hearted &
frantic to heavy & melodramatic in an instant. This is a solid debut for Outer Core, and if there was one word I could use to
describe their career going forward it would be: promise.
-Jasen Weaver